A dark shadow is spreading across our nation. An unprecedented censorship wave is happening, driven by a Biden administration hell-bent on making sure 99.9% of the populace is vaccinated. These people pursue censorship, seemingly unaware of the damage they do to human rights and democracy in the process.

Millions Against Medical Mandates (MAMM) is now the most censored medical freedom organization on social media. You cannot post, comment, or even so much as make a reference to MAMM in direct messaging on Facebook or Instagram without it prohibiting you with a big, fat, paternalistic label that says, “This is spam” absent any justification, rationale, or ability to comment. No fact-check, just a pronouncement “This is spam.” Also, the messages that reference MAMM cannot be sent on Instagram without any explanation given at all.

This level of censorship has not been applied to other movement groups like Children’s Health Defense, GreenMedInfo, and National Vaccine Information Center. In under two years, Millions Against Medical Mandates went from a visionary idea to a powerful force that is driving unity throughout our movement.

Now, compared to these other movement groups, MAMM is the new kid on the block. MAMM is a small group consisting of a few, but deeply committed, staff. Our funding sources do not approach the level of these other groups. Also, those groups put out far more content than we do. Then why is MAMM so heavily targeted for censorship? We will explore this in-depth later; the implications are surprising.

Thus, censorship leads to an undermining of trust in our societal institutions. Pundits decry the polarization of America, but they miss interpreting what all of this means. Public health trust is at a low. Americans are now mistrustful of big business more than ever. Polls say that societal mistrust is at an all-time high, yet the powerful continue with their course like herded bison headed towards a cliff.

Google’s YouTube has implemented draconian censorship policies regarding what they term “medical misinformation that contradicts local health authorities or the World Health Organization’s (WHO) medical information about COVID-19.” However, these policies aim not to correct information wrongs but instead to stifle and remove scientific debate from the public sphere.

The hypocrisy is blatant. Google states that “content that recommends use of Ivermectin or Hydroxychloroquine for the prevention of COVID-19,” has been debunked by science as ineffective. Yet Google ignores a plethora of medical evidence, such as this published Feb 2021 study that shows a 73% reduction in COVID-19 infection among healthcare workers prophylactically taking Ivermectin. It also fails to mention that Ivermectin has been used by public health officials in Mexico and India for COVID-19, leading to a substantial reduction in deaths. Nor does Google permit the discussion of the numerous randomized-controlled trials used to gauge the efficacy of Ivermectin.

To compound the issue, Google’s policies set the WHO as the ultimate arbiter regarding what constitutes valid medical information, but it does so without acknowledging the WHO’s financial entanglements with Big Pharma or its other serious problems. The National Review assessed the WHO as “plagued by persistent wasteful spending, utter disregard for transparency, pervasive incompetence, and failure to adhere to even basic democratic standards.”

Google pretends to be an unbiased arbiter of truth, but it fails to disclose its financial conflicts of interests. For example, Google seeks to partner with Big Pharma to break into the enterprise medical technology markets. Censorship of Ivermectin benefits Big Pharma as using the generic drug Ivermectin to treat COVID-19 hurts the pharmaceuticals who seek to profit from patentable treatments such as new anti-vials.

Whatever happened to Google’s motto “Don’t be evil”? In pursuit of higher stock price profits, business ethics and values are too often lost. Unfortunately, science itself, and ultimately the American people, suffers from arbitrary censorship policies.

But let us go back to the original question: why Is MAMM the most censored group on Facebook? The answer is that Millions Against Medical Mandates dares to advance a powerful idea: all individuals have the right to bodily sovereignty as a fundamental right.

The implications of bodily sovereignty are profound. It means that you are the one that owns your body, not the government, not the medical industry, not Big Pharma. It has the secondary effect of making forced medical procedures, including vaccine mandates, immoral and unethical. It would mean that attempts at coercion, including basing employment or receiving government benefits on medical status (inclusive of vaccination), are wrong.

The ultimate role of censorship is to ensure that people cannot think their thoughts or advocate for their rights. In addition, it is meant to disguise another critical fact: our societal institutions, including medical institutions, are rooted in a philosophy of violence and fundamental inequality.

Societal institutions demand the subjugation of our body and mind to meet societal goals, but they do so in a philosophically violent way by utilizing coercion and psychological manipulation. It is a continuation of the colonialist mindset, the implicit belief that certain members of society are intellectually or morally superior, allowing them to impose their will upon a stupid majority. Censorship is the fundamental tool that makes this all happen.

MAMM dares to advance another powerful idea: collaboration and solidarity as the means to effect societal change.

MAMM must be censored because it aims to advance what elites cannot allow: the uniting of the common people to take back their human rights and demand equal treatment from their powerful societal vested interests.

The people are waking up and seeing through the veil that hides societal power behind faceless institutions. The people are saying, “Enough is enough,” and are no longer tolerating societal manipulation at the hands of the powerful. This sentiment is fueling movements like the Enough movement.

The COVID-19 pandemic has left numerous changes in society. The most powerful one, the one that elites would like you to forget, is that people are awakening and demanding a new vision for humanity.

This vision will not be the elite’s vision of Agenda 2030, but one that puts people first, reforms our societal institutions to serve the people instead of the powerful, and prioritizes the human rights values of mind and body sovereignty.

It all starts with the power of your voice. They must censor so that you forget your strength and choose inaction. Change begins with you by choosing to stand up against wrongs, no matter how small the act of resistance.

The United Nations, Universal Declaration of Human Rights, stated, “Everyone has the right to freedom of opinion and expression; this right includes freedom to hold opinions without interference and to seek, receive and impart information and ideas through any media and regardless of frontiers.” 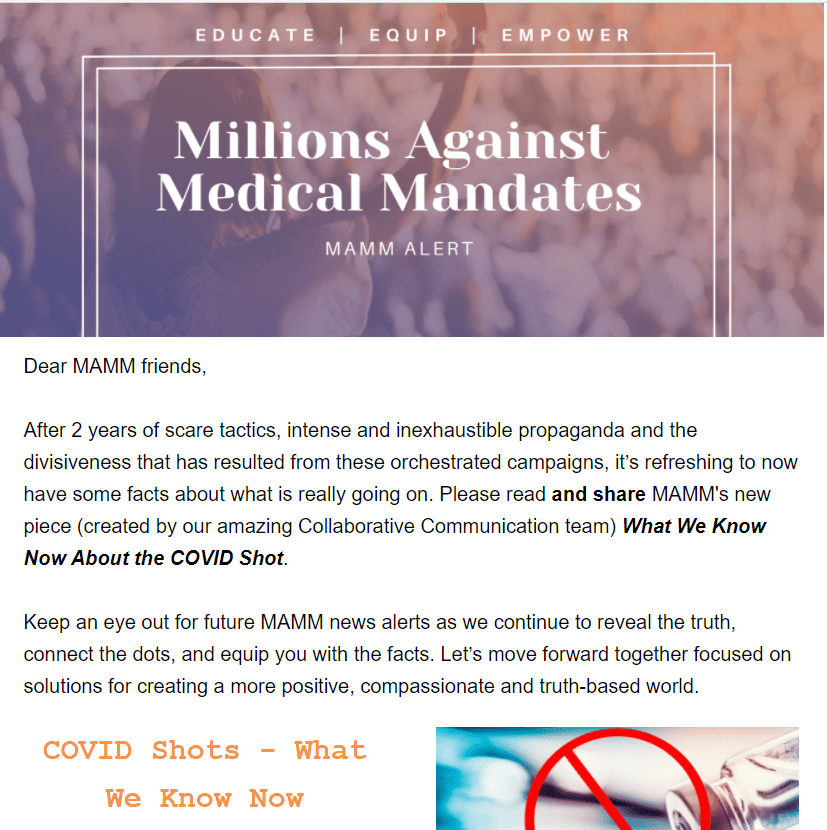